Why the Racial Wealth Gap Won’t Go Away

Wealth inequality can be described as the unequal distribution of assets within a population. The United States exhibits wider disparities of wealth between rich and poor than any other major developed nation. Definition provided by Inequality.org

Wealth is equated with “net worth,” the sum total of your assets minus liabilities. Assets can include everything from an owned personal residence and cash in savings accounts to investments in stocks and bonds, real estate, and retirement accounts. Liabilities, on the other hand, are what a household owes out: a car loan, credit card balance, student loan, mortgage, or any other bill yet to be paid.

In the United States, wealth inequality runs even more pronounced than income inequality. 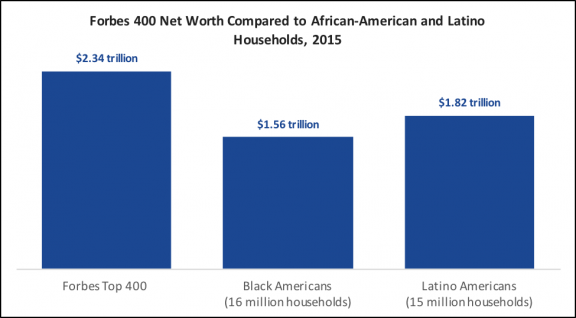 Read: Why the racial wealth gap won’t go away

The Roots of the Widening Racial Wealth Gap

According to a 2009 study by Brandeis University’s Institute on Assets and Social Policy home ownership is the single largest factor in driving racial wealth inequality.

Among households with positive wealth growth during the 25-year study period, the number of years of home ownership accounts for 27 percent of the difference in relative wealth growth between white and African-American families, the largest portion of the growing wealth gap. The second largest share of the increase, accounting for 20 percent, is average family income. Highly educated households correlate strongly with larger wealth portfolios, but similar college degrees produce more wealth for whites, contributing 5 percent of the proportional increase in the racial wealth gap. Inheritance and financial support from family combine for another 5 percent of the increasing gap. How much wealth a family started out with in 1984 also predicts a portion (3 percent) of family wealth 25 years later.

Black people tend to buy houses later in life; therefore, their houses do not increase in value as much. They also tend to live in black neighborhoods, where real estate values are lower since white people don’t want to buy there. Black people also inherit far less money, and they are not able to build wealth through marriage as easily as white people. This much, by itself, adds up to a self-perpetuating system in which whites steadily increase their own wealth, while black families mostly cannot.

Add in poorer education, and fewer employment opportunities, and institutional racism, and you have a very, very steep hole for black families collectively to climb out of. And it will take a very, very massive public investment to change it.

What Is the Solution To The Wealth Gap Problem?

As with many  “think tank” and academic solutions, most of these are rooted in “policy changes”. The inherent problem with this mode of thinking is that the poor and disenfranchised are left waiting for politicians to make changes in a system that is ultimately controlled by the wealthy.

The idea of policy change has been argued for the last 50 years.While the rhetoric has changed, the core argument has remained the same.

In addition to any governmental policy change, there must be a paradigm shift in the affected communities with regard to saving and spending habits. We need the think about solutions in a new way.

For a fresh perspective and actionable steps you can take to address the wealth gap you’re invited to join the conversation, There’s Money Out There on July 16th at 1:00 pm on WURD 900 AM.

Creative approaches to personal wealth will be discussed with guests Pamela Jolly and Reggie Kyle; financial experts who have crafted alternative solutions for African Americans to address the Wealth Gap problem. You will want to tune in for what promises to be a vibrant and revealing conversation with practical advice that you can implement right away.

To learn more about the TMOT show, click here.

Bob Coleman is Director of Marketing at the Prime Group, LLC and a contributor to WPFSI.

Need Funding for Your Salon?

About the Author: Bob Coleman

What you need to apply